Halloween is one of our favorite holidays here at Shakespeare in Action. Witches, ghosts, magic, and dress up are all a huge part of the holiday. Many of the things that make Halloween great are also a huge part of Shakespeare’s works. In celebration of Halloween today, we are going to throw a Shakespeare themed Halloween party! Let’s go through our list of essentials…

For a Shakespeare themed Halloween party, it is mandatory that you come dressed as one of the many characters that Shakespeare created or wrote about in his plays. Here are some suggestions for couples/ duos, groups, and individuals to dress up as!

The Ghost of King Hamlet

Shakespeare’s plays offer us a lot of room to work with when trying to come up with spooky decorations. Take inspiration from plays like Macbeth to create a scary environment for your guests. make sure you have a cauldron for the witches to brew their potions, lots of dry ice to add fog, and strobe lights to create lightning! Oh, and don’t forget to carve a jack-o-lantern!

It is not hard to find references to food in Shakespeare’s plays. Characters often meet at meals and parties, so lots of great food and drinks are mentioned! Here are some inspiring quotes to help you plan your menu:

“Good wine is a good familiar creature, if it be well used.”
-Othello

My lord of Ely, when I was last in Holborn I saw good strawberries in your garden there; I do beseech you send for some of them.
-Richard III

Finish the menu off with a great Shakespeare cake for dessert!

Finally, you will want to entertain your guests with some music inspired by Shakespeare! Here are some Shakespeare inspired tunes to help get your guests on the dance floor!

Now that we have everything we need, let’s party! Have a safe and happy Halloween, everyone!

It’s all about community!

This Saturday, June 8th marks the inaugural Dundas West Fest – between Lansdowne Avenue & Roxton Road, from 11am to 1pm!  It’s…

…a car-free, participatory, community-inspired celebration of everything local!

Fun for the whole family – rain or shine!

This event is a collaboration between the Dundas West BIA and Little Portugal BIA, with support from Councillors Bailão (Ward 18) and Layton (Ward 19), and with support from many local organizations and residents.

For more information and a full event schedule, visit the website below!

Sweet friends (19), ‘tis a night of revels! (20) How shall we beguile the lazy time if not with some delight? (21) What dances shall we have to wear away this long ago of three hours between our after-supper and bedtime? (22) Now let’s have a catch (23) of dancing shoes with nimble soles (24). Come, some music! Come, the trumpets, sackbuts, psalteries and fifes, tabours and cymbals (25), sounds and sweet airs, that give delight and hurt not (26). A hall, a hall, give room! – And foot it, girls. More light, you knaves! And turn the tables up, and quench the fire. The room is grown too hot! (27)

Welcome! Welcome to Shakespies! Home of the best meals on this side of whatever Thames you are closest to! Sit./Sit, sir,/Nay then (1) – you may stand while you eat. Yes, it’s the list (2): it items all we have here. Allow me to explain to you our specials!

We begin the crust with two grains of wheat hidden in two bushels of chaff. (6) Fret not, this is just a prologue to an egg and butter. (7) We mix in three pound of sugar (8) to give it that extra sweetness. And last, for a garnish, we crack a fusty nut with no kernel. (9) Price: 5 pennies

We provide a great meal of beef and iron and steel (10). Along with our fine beef and assorted metals, we throw in a handful or two of dried peas. (11) Warrant, there’s vinegar and pepper in’t. (12) We finely chop some midnight mushrooms (13) and throw them into the mix. Then we spice up this dish of chastity with rosemary and bay. (14) Price: 1 shilling

A salad for the health-conscious

We begin by sow[ing] lettuce…[and] have it sterile with idleness, or manured with industry, (15) and mix in olives of endless age. (16) For that exotic taste, we throw in purple grapes, green figs, and mulberries (17). We chop up a large onion to aid those whose breath with sweetmeats tainted are. (18) We dress it with the oil, the balsamum, and aqua-vitae. (19). Price: 16 pennies.
This is just a sampling our sumptuous feast! So come to Shakespies: open from lovers’ food to morrow deep midnight! (20) 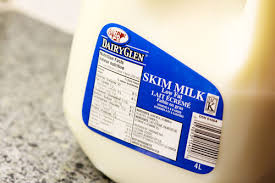 A Midsummer Night’s Dream is a very popular play this summer! It’s being produced for CanStage’s Dream in High Park, as well as several other companies in and around the GTA. (Including a Brampton production that one of our very own interns is a part of!) So why not a Shakespeare invented word featured first in that very play?

When we’re first introduced to Puck, the king of the Fairies’  henchman,  a Fairy describes to us the mischief he causes…

Either I mistake your shape and making quite,

Or else you are that shrewd and knavish sprite

Call’d Robin Goodfellow: are not you he

That frights the maidens of the villagery;

Skim milk, and sometimes labour in the quern

And sometime make the drink to bear no barm;

Mislead night-wanderers, laughing at their harm?

Those that Hobgoblin call you and sweet Puck,

You do their work, and they shall have good luck:

Are not you he?

Here we see “skim milk” used for the first time. According to the OED, it is defined as…
“Milk with the cream skimmed off or otherwise removed. Also in fig. context.”

But as is noted at the end of the definition, Shakespeare more often used it metaphorically. First here in A Midsummer Night’s Dream (1595 or ’96, according to the OED) describing Puck as dividing himself and popping up unexpectedly to fright ladies. (And if you’re familiar with the 1999 film version you might remember that Puck – Stanley Tucci – vanishes and re-appears just like this shortly after this description.)

Shakespeare uses it again in Henry IV, Part I (Act II, Scene iii) with Hotspur. Although here he uses it to talk about York’s betrayal (dividing his loyalties like cream from milk/skim milk).

It’s a clever metaphor, but not one I see slipping back into our vocabulary too easily. Try to use dairy products to describe a friend’s betrayal nowadays and you’re sure to get a funny look.

After a weekend of feasting, it seems appropriate to explore one of Shakespeare’s more delicious offerings.

“A dish fit for the gods” may sound culinary, but originally it was anything but!  The phrase originally appeared in Julius Caesar (1601).  As Brutus plots the murder of Caesar he says, “…gentle friends, Let’s kill him boldly, but not wrathfully; Let’s carve him as a dish fit for the gods…”.  Brutus wants Caesar dead, but he reminds his fellow conspirators of the importance of killing him without butchering the corpse, so as to make a proper offering to the gods.

Not quite the dish I was thinking of!